Nonlinear regression is used to see whether one continuous variable is correlated with another continuous variable, but in a nonlinear way, i.e. when a set of x vs. y data you plan to collect do not form a straight line, but do fall on a curve that can be modelled in some sensible way by a known equation, e.g.

Some important general considerations for fitting models of this sort include:

The data in enzyme_kinetics.csv gives the velocity, v, of the enzyme acid phosphatase (µmol min−1) at different concentrations of a substrate called nitrophenolphosphate, [S] (mM). The data can be modelled using the Michaelis-Menten equation given at the top of this post, and nonlinear regression can be used to estimate KM and vmax without having to resort to the Lineweaver-Burk linearisation.

In R, nonlinear regression is implemented by the function nls(). It requires three parameters. These are:

Fitting a linear model (like linear regression or ANOVA) is an analytical method. It will always yield a globally optimal solution, i.e. a ‘perfect’ line of best fit, because under the hood, all that linear regression is doing is finding the minimum on a curve of residuals vs. slope, which is a matter of elementary calculus. However, fitting a nonlinear model is a numerical method. Under the hood, R uses an iterative algorithm rather than a simple equation, and as a result, it is not guaranteed to find the optimal curve of best fit. It may instead get “jammed” on a local optimum. The better the starting estimates you can give to nls(), the less likely it is to get jammed, or – indeed – to charge off to infinity and not fit anything at all.

For the equation at the start of this post, the starting estimates are easy to estimate from the plot: The horizontal asymptote is about v=9 or so, and therefore KM (value of [NPP] giving vmax/2) is about 2.

The syntax for nls() on this data set is:

The parameters in the equation you are fitting using the usual ~ tilde syntax can be called whatever you like as long as they meet the usual variable naming conventions for R. The model can be summarised in the usual way:

The curve-fitting has worked (it has converged after 4 iterations, rather than going into an infinite loop), the estimates of KM and vmax are not far off what we made them by eye, and both are significantly different from zero.

this means the curve-fitting algorithm has choked and charged off to infinity. You may be able to rescue it by trying nls(…) again, but with different starting estimates. However, there are some cases where the equation simply will not fit (e.g. if the data are nothing like the model you’re trying to fit!) and some pathological cases where the algorithm can’t settle on an estimate. Larger data sets are less likely to have these problems, but sometimes there’s not much you can do aside from trying to fit a simpler equation, or estimating some rough-and-ready parameters by eye.

If you do get a model, you can use it to predict the y values for the x values you have, and use that to add a curve of best fit to your data: If you need to extract a value from the model, you need coef():

This returns the first and second coefficients out of the model, in the order listed in the summary().

Try fitting non-linear regressions to the data sets below This bit adds the curve to the plot below. The plot indicates that the starting parameters should be

This lists the estimates of μmax, ln(IC50) and s, plus the standard error of these estimates and their p values. Note that they’re all pretty close to what we guessed in the first place, so we can be fairly sure they’re good estimates. To get the actual value of IC50 from the model:

This gives 2.97 µM, which corresponds well with our initial guess.

To add the curve, we do the same as before:

Note that in the real world, you might be hard-pressed to fit a 3-parameter model to a data set of just 8 points, because it is unlikely that they would fall so neatly, and with such a convenient range from zero effect to complete inhibition. In the real world, there’s a very good chance that the nonlinear regression would fail, puking up something like:

and requires this modification to the nls():

The output shows divergence (the numbers in the columns are the values of mumax, logofIC50 and s respectively:

Option one: fix the value of mumax to the value from the previous answer. This gives us a natural log of IC50 of −11.2386. 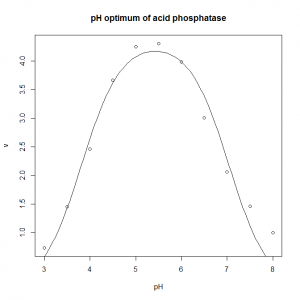