When we went to the Berlin Botanischer Garten in 2005, we saw some pretty cool stuff,  including a flowering Welwitschia and some fantastic tree ferns. However, like every other botanical garden I’ve ever visited, mosses , hornworts and liverworts were effectively ignored, or – worse – treated as dreary also-rans at the start of one of those ‘evolution houses’ so beloved of curators without the wit to find something accurate to do with their cycads. 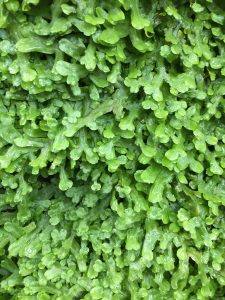 Most large glasshouses will have a crop of the liverworts Conocephalum conicum (above) or Marchantia polymorpha in them somewhere. Of course, glasshouse curators all think these are weeds; however, I like to think of them as a middle-finger to every so-called botanist who thinks plants are only plants if they’re wafting their genitals at some poor insect or other.

The main problem with displaying mosses is that they’re mostly quite small, so you need to be up close to appreciate them. Berlin have solved this by creating a reverse sunken-garden: you walk down some steps into a basin, around the edge of which are arrayed the mosses. It’s a lovely idea, spoilt only a little by the netting they have put over the planted area at ground level to stop people from trudging over them in their pursuit of angiosperms. For my long-suffering companion this was too much: “It looks like the backyard of an abandoned bungalow”. Tsk. Sticks and stones… are all just substrates for them to grow on.

Although most mosses are quite small, a few conduct water sufficiently efficiently up their stems to grow much larger. Some of the mosses in the order Polytrichales can grow to almost a metre tall, but even the smaller ones from this order, like the smoothcap below, are still rather chunky and striking: 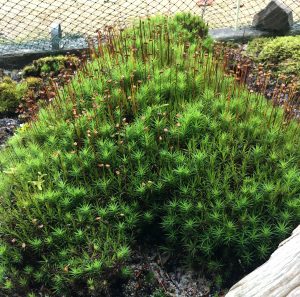 The leafy green bit of a moss that mostly attracts your attention is haploid – that is, it contains only one copy of each of its chromosomes in each of its cells. This is unlike most of the cells in your body (and those of most plants), which are diploid, with two copies of each chromosome. The only part of a moss that is diploid are the little stalked capsules that you can see growing out of the leafy mass in the photo above. Those diploid capsules make spores through the specialised cell division process that reduces diploid cells to haploid cells. This process – meiosis – is the same one that occurs in your ovaries or testicles. The result is a mature capsule full of haploid spores, which drift away on the wind and eventually germinate into the leafy green body of the moss. It’s the leafy green part that then makes the eggs and sperm. The sperm swim to another moss plant, fertilise its eggs, and the diploid cell from that fertilisation then grows up to make the capsule.

This life-cycle is inside-out compared to the way humans reproduce. The only cells in your body that are haploid are your eggs and sperm, and they never have an independent existence. So that whole section of a moss’s life – from spore to leafy plant to eggs and sperm – is condensed into just the eggs and sperm of a human life-cycle. If we reproduced like mosses or liverworts, we would all start as a kind-of unfertilised ‘egg’ that grew directly into a big mass of haploid cells. That blob would then sprout vaginas and penises all over its surface. The penises would fertilise nearby vaginas, and then a diploid baby would grow directly out of each one. That baby would have a gigantically long neck, and when it hit puberty, its head would explode in a shower of eggs to restart the cycle. 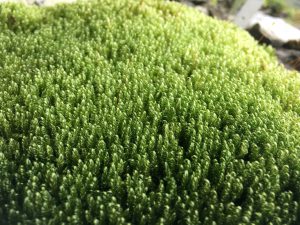 At the Moosgarten in Berlin there is a vending machine where you can hire a small magnifying glass to  appreciate the details of this pornographic cycle. 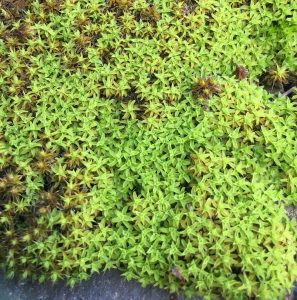 Tragically, there was one promised – but missing – bit of phylodiversity. The moss mugshot guide promised a hornwort, but there was no Anthoceros or Phaeoceros to be seen. These plants aren’t technically mosses (or liverworts), but something slightly more closely related to ferns and flowering plants (probably). My search continues.

Another overlooked part of the vegetable empire that Berlin showcases brilliantly are the spikemosses and clubmosses. Despite the name, these are not mosses at all, but are sister to the huge group of plants that contains all the ferns, conifers and flowering plants. Clubmosses are no longer a major player in the world’s ecosystems,  but during the Carboniferous (300 million years ago) their relatives were a dominant part of the forests that formed the coal we seem so keen on burning. 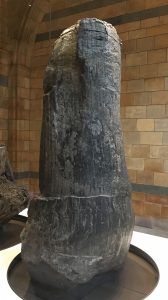 Sigillaria sp. – the trunk of a giant clubmoss: this is at the new main hall of the Natural History Museum in London, rather than in Berlin

The true clubmosses include Lycopodium, whose spores once found use as fingerprint powder, but which is now mostly used (if at all) as a pyrotechnic flash-powder in magic acts. 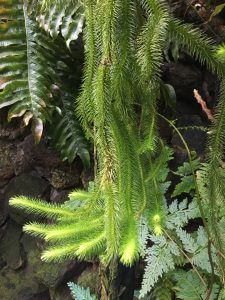 Their relatives the spikemosses may be a little more familiar: the genus Selaginella includes one of those resurrection plants you can occasionally buy whilst exiting through the gift shop, and Krauss’s spikemoss, a plant from the Canary Islands that is becoming an option for outdoor ground-cover in the UK because of climate change: it’s hardy down to 5°C (and has the RHS Award of Garden Merit, lah-dee-dah) but I’ve managed to overwinter it in a sheltered spot in London despite it getting covered in snow this year.

I get to appreciate spikemosses in my garden only because burning the remains of their fossilised relatives is hastening us on the way to extinction. There’s probably some lesson to be learnt here. 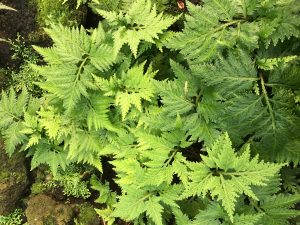 As you can see above, the leaves of spike-mosses look rather fern-like, but what you are probably identifying as leaves are actually whole boughs of tiny scale-leaves attached to a much-branched stem. The resemblance to ferns is not coincidental though: the leaves of ferns (and of conifers and flowering plants) are probably derived from a much-branched stem – but with fused webbing rather than individual overlapping scales.

Some of the spikemosses are really extremely pretty: this sumptuous specimen seems to be a William Morris. 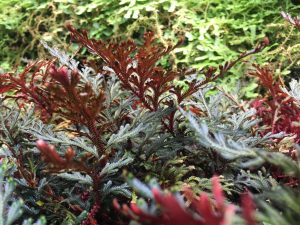 Botanerd highlights (as if more were needed)

This picture isn’t going to win any awards because the plant  was trapped in a locked-off area of the glasshouse so I had to take the photo from a looong way away, but – drumroll, please! – here is an actual Amborella trichopoda, in the flesh, as it were. This plant is in the sister group of all the other flowering plants – indeed, is the sister group, as there’s only this one species in it. If you don’t think this is the most exciting thing you can experience on a holiday to Berlin in early September, then I pity you. 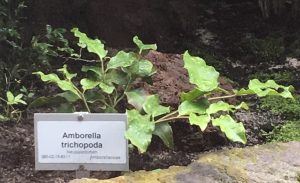 Amborella trichopoda. Don’t bother clicking – this is about the maximum size the resolution can manage!