Stems all the way down

In the days when potted plants were more than just disposable land-filler, my Nan would try to force her wizened poinsettia to flower by sticking it into a bin-liner with some apples every night from October until December. Sum total of flowers she ever saw: zero. Ho hum. But how many poinsettia flowers can you see in the picture below? 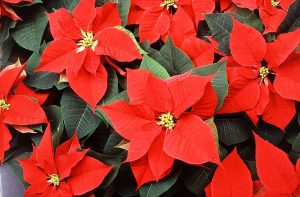 If you’re wondering whether you can include the ones that are partly off-screen, you are asking the wrong question. There are many hundreds of flowers here, not six or ten. The red leafy-looking things you might have been cruelly mislead into thinking were petals are actually brightly coloured leaves. The flowers themselves are found in the tiny yellow-green blobs in the middle… 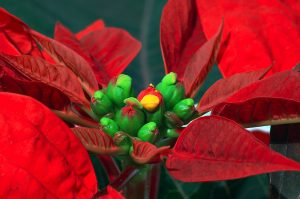 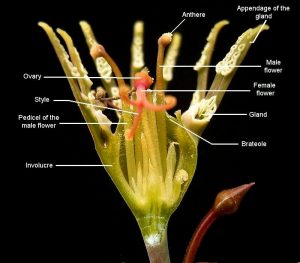 In one of the close relatives of the poinsettia – the crown-of-thorns – two coloured leaves surround just a single cyathium, making it a flower-squared: a bunch of tiny flowers masquerading as a single bloom: 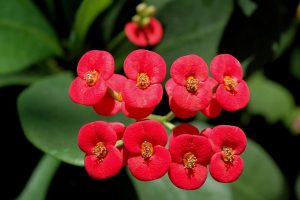 Eight crown-of-thorns cyathia [CC-BY-SA-3.0 Ezra Katz] – as the author says on the upload page on Wikipedia “a close up of Euphorbia milli cyathia (not of the flowers!)”

This means that the poinsettia ‘flower’ is really a flower-cubed: it is a set of tiny petal-less flowers grouped together into a cyathium, and then a bouquet of cyathia are grouped together and surrounded by coloured leaves. It is a flower reinvented – twice!

The cyathium is one of many re-invented wheels in the business of making flowers. All the 33 thousand species in the daisy family have flowers-squared, as do all of the arum lilies. The flowering structures of grasses are flowers-squared or cubed according to taste. 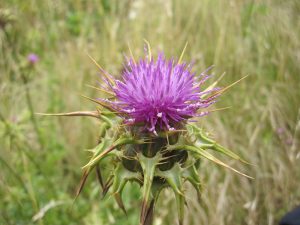 Thistles (like this Silybum marianum) and all the other daisy family have flower-heads that are composed of many very small flowers clustered together and – in this case – surrounded by spiky rather than ‘pretty’ leaves.

Deeper down the rabbit-hole…

When I said the ‘red leafy-looking things’ on a poinsettia weren’t really petals, I wasn’t lying, but from an evolutionary point of view, that’s all a petal actually is. Petals are a ring of leaves that became useful for attracting pollinators in some long-dead ancestor of the flowering plants.

Something similar applies to the male anthers and female carpels at the centre of a flower: these are also modified leaves, wrapped around the tissue that makes the pollen and egg-cells. So even a single real flower can be seen as a cluster of smaller male and female ‘florets’ (botanists call these sporangia), themselves made of rolled leaves, and surrounded by yet more (prettily coloured) leaves. A flower is a leaf-squared, so a poinsettia ‘flower’ is a leaf-to-the-fourth-power. 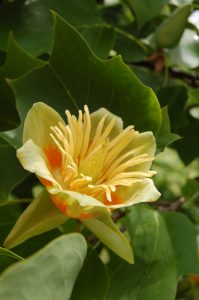 Oh, but we’re not done yet.

What is a leaf? Well, if you hold up the leaf of most land plants to the light, you’ll see a lot of veins. Depending on what you’re looking at, these may be arranged in neat parallel lines, or in a tree-like branching network. 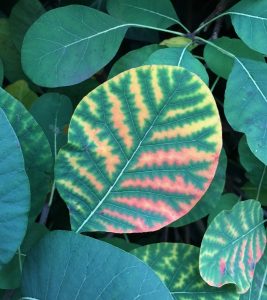 A tree within a tree (Cotinus coggygria)

The latter kind gives you a clue as to what a leaf really is. A leaf is a much-branched but flattened stem with tissue stretched out across it like the webbing between the toes of a duck.

So if a leaf is a stem-squared, then a poinsettia ‘flower’ is a stem-to-the-fifth-power:

Plants: what you get when you take one good idea and run with it for 500 million years.