It’s amazing how informative an anus can be.

Take this sea urchin. The orange pucker in the middle of the spines is its “around-the-bum”, although zoologists would insist on writing that in Greek as “periproct“. The bright orange ring-piece is characteristic of this species, and marks it out as Diadema setosum, rather than any of the less rectally blessed species of Diadema. The butt-hole of an urchin is actually the second it will own, because urchins go through a metamorphosis that shames even that of a butterfly. The larva of an urchin looks not even a little bit like the adult… 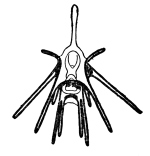 …and the adult urchin develops like a well-organised tumour within the body of the larva. For this reason, the adult’s anus is an entirely different hole from the larva’s anus.

The development of the larva’s original butt-hole during development from a fertilised egg turns out to be quite revealing. Surprisingly, it marks out sea urchins and their relatives – like sea cucumbers and starfish – as much closer relatives of yours and other backboned animals, than they are of insects or worms or jellyfish, or indeed, or pretty much any other animal.

As a fertilised human or sea urchin egg divides, it forms a hollow ball of cells, somewhat like a football. Then, some of the cells on the surface fold in on themselves, forming a shape rather like what you get if you punch your fist into a half-deflated football. The dent drills its way through, and eventually opens out through the other side of the ball. What you end up with is a double-walled tube, with a hole at either end.

In humans and all other animals with backbones, and in the larva of sea urchins and starfish and sea cucumbers, the first hole – the one formed by the dent – becomes the anus; and the second hole – where the dent punches through to the other side – becomes the mouth.

In most other animals, the first hole becomes the mouth, and the second the anus (pedant alert: I’m glossing over some details here).

Humans and sea urchins develop arse-first. Or mouth-second, as zoologists would prudishly have it, preferably euphemised further by writing it in Greek. Humans and fish, and sea urchins and starfish are all “deuterostomes”.

The development of the chocolate starfish of a starfish and of the asshole of an ass hint at a deep evolutionary connection between two very different groups of animals. Enlightenment can be found in the most unexpected places.