Organism of the week #28 – Fractal art

Organism of the week #29 – Galling

Today is the first day of the new (academic) year at $WORK, but – aside from a couple of intro lectures – this is the calm before the real storm, which arrives in the form of a deluge of biological chemistry in November. If you’re lucky, you’ll get a few mugshots of some weird ciliate or other around then, otherwise, expect tumbleweed until the new (calendar) year…

Insects and flowering plants have been co-evolving for 200 million years or so, so it’s unsurprising that many of their interactions have become very intimate. The relationships between gall-forming insects and their host plants are particularly interesting. Gall-forming insects lay their eggs on plants, but when the larvae hatch, instead of munching through the plant in the usual fashion, the larvae make the plant build bizarre little houses for them. These are the galls. Galls provide protection from weather, some protection from things that might like to eat the gall-former itself, and food for the developing larva.

In the UK, there are many gall-forming insects that target oak trees. These are mostly very small wasps. One of the most obvious is the knopper gall, which are the sticky crater-shaped things you often see attached to acorns around August.

Rather like the fluke we met a few weeks ago, knopper gall wasps have a complicated life-cycle involving several different hosts, in this case two different species of oak: the English (Quercus robur) and the Turkey (Quercus cerris). Female wasps emerge in spring from the galls that fell from English oaks the previous autumn. These females then lay asexual eggs on the catkins of the Turkey oak, which hatch out, and form rather inconspicuous galls. The males and females that hatch from these galls in April then mate, and the females lay their eggs on the developing acorns of English oaks, where they develop into the knopper galls in late summer. Knopper galls caused by the larvae of the wasp Andricus quercuscalicis, on oak (Quercus robur)

Like so many pests and diseases – the knopper gall is actually a fairly recent introduction: the first galls in the UK were recorded only in the 1950s.

Smaller but creepier, the silk-button spangle gall is a trypophobes’ delight. Like the knopper gall, they’re caused by small wasps, but are much less obvious until you flip a leaf over: Mostly silk-button spangle galls caused by the larvae of the wasp Neuroterus numismalis, also on oak

The less creepy common spangle gall isn’t as likely to make you feel like you have maggots crawling under your skin, but like the silk-button spangles, that’s exactly what the plant has got. Common spangle-galls (Neuroterus quercusbaccarum) on – you’ll never guess what. There are a few older reddish spangles in the silk-button image above too.

The most famous and most useful gall found on oak is the oak apple. A mixture of mashed up oak apple galls and iron salts was – for a millennium and a half – what you dunked a quill pen into, if you were lucky enough to know how to write. Oak apple gall: these are caused by the larvae several different species of by cynipid wasps [CC-BY-SA-2.0 Bob Embleton]

Like the knopper and spangle galls, oak apples are caused by the larvae of a tiny wasp, but it’s not just wasps that can cause galls, or indeed just insects. Roundworms (nematodes) can also form galls, usually on the roots of plants; as can some fungi. Mites, which are more closely related to related to spiders than to insects, are responsible for many galls of sycamores and other maples: Why would a plant build a house for a parasitic insect or mite? The long answer is very long, but the short answer is that the parasite secretes plant hormones called cytokinins to manipulate the plant into forming the gall. In plants, cytokinins cause cell division and growth. They also act as “feed me” markers: sugars and other nutrients are preferentially directed towards tissues that have cytokinin in them. Cytokinins also cause plant cells to make red pigments. By secreting cytokinins (and other plant hormones) gall-forming insects, mites, fungi and nematodes manipulate the plant into building small – often red! – houses for them, and to supply those houses with sugar. 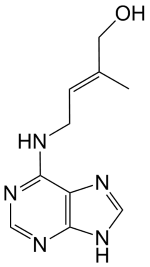 A cytokinin hormone: the structure is a modified form of the DNA base adenine

The galls formed by insects and mites are amazing structures, but at a molecular level, the most extraordinary galls of all are formed not by insects or mites, but by bacteria: Crown galls may not look so impressive, but the way in which their inhabitants cause the gall to be formed most certainly is. The galls are formed by the bacterium Rhizobium radiobacter. [For any biologists doing a double-take at this point: until recently Rhizobium radiobacter was known as Agrobacterium tumefaciens , but it’s been reclassified. This is Brontosaurus all over again…]

Rhizobium radiobacter is the world’s smallest genetic engineer. Rather than simply secreting plant hormones to make the plant direct food at it, like the gall-forming insects do, this bacterium actually injects a piece of DNA into the plant’s cells to bend them to its will. The DNA encodes enzymes for plant hormone synthesis, which causes the plant cells to grow into a cancerous mass: the crown gall.

But even that’s not enough for this bacterium. The nutrients directed into the gall by the plant are not quite to the bacterium’s taste, so the DNA it injects also encodes genes that turn plant cells into factories for bacteria-friendly food. This food even leaks out of the plant’s roots, feeding the bacterium’s sisters in the soil.

It took until 1982 for humans to develop the technology to genetically manipulate a crop plant to make better food. A mindless single-celled organism has been pulling off the same trick for millions of years. There’s nothing new under the sun.