Enzymes in cells can be modelled using the Michaelis-Menten model

Enzymes can be, and often are, modelled by the Michaelis-Menten (well, Briggs-Haldane) model:

This model works out very well when you mix together an enzyme and its substrate in a test-tube and measure the initial rate of product accumulation. Here are some data from a practical I run with my first-year biology students, showing a nice hyperbolic curve as predicted by the model: 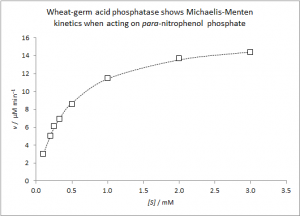 Wheat-germ acid phosphatase shows Michaelis-Menten kinetics when acting on para-nitrophenol phosphate, with a vmax of about 17 µM min−1 and a KM of about 0.5 mM.

However, the Michaelis-Menten model relies on a number of assumptions. During the Veneration and Memorisation of the Derivation, these assumptions may be dashed past by the lecturer doing the mathturbation, and may be ignored by the students trying to grasp the point of the modelling. This is problematic, as not understanding the assumptions leads to the Michaelis-Menten being applied thoughtlessly in situations in which it does not apply.

Which turns out to be almost all situations.

For the Michaelis-Menten model to be applicable to an enzyme in a cell, then these assumptions need to hold.

Are the only chemicals in a cell E, S, P and ES‡?

The answer is obviously no. Cells contain thousands of metabolites. To imagine that none of them have any relevant effect on the enzyme under consideration is patent nonsense, particularly when half of the rest of the enzymology course is about enzyme inhibitors, and enzyme regulation by small molecules.

Are enzyme-catalysed reactions in the cell irreversible?

The answer depends on which reaction you’re talking about, but it is certainly true that many of reactions in the cell are very nearly at equilibrium under normal cellular conditions. For example, in glycolysis:

…all but three of the glycolytic reactions (those shown with a → rather than a ⇄) are usually close to equilibrium in the cell. At equilibrium, the forward and reverse rates of reaction are equal, so for these enzymes, the Michaelis-Menten model is inappropriate because assumption #2 is completely broken. The backwards reaction is appreciable because the concentration of product is relatively high. So for many enzymes in the cell, the answer to the question above is a resounding “no”.

You can model these enzymes with a (substantially more complex) reversible version of Michaelis-Menten model, but at, or close to, equilibrium, these enzymes are most assuredly not causing products to accumulate in the way implied by a naïve glance at the graph above. Enzymes acting on near-equilibrium reactions are also exquisitely sensitive to changes in substrate and product concentrations. This is something else that is not obvious from the Michaelis-Menten graph, but which is vitally important, as we shall see below.

In a test-tube, we can provide a super-duper pristine environment of just E and S, which will give us more-or-less Michaelis-Menten kinetics after a little while (once the concentration of ES‡ has settled down) and then for a little while (until P accumulates a bit and the reverse reaction becomes appreciable), but this is even less realistic than the four-ingredient tube above!

What of the remaining three reactions of glycolysis? It turns out these enzymes have to violate the assumptions of the Michaelis-Menten model, and for a very good reason.

If enzymes that catalyse irreversible reactions in the cell were to exhibit Michaelis-Menten kinetics, what would their response to substrate look like at low substrate concentrations?

Substrate concentrations in cells are typically lower than, but somewhere in the vicinity of, KM. When [S] is lower than KM, the Michaelis-Menten can be approximated as:

To double the velocity of such a reaction, you need to double the concentration of substrate: if you look at the graph above, you can see it’s more-or-less a straight line between 0 and 0.5 mM.

Requiring the concentration of a chemical to double in order to get an appreciable increase in the rate of the reaction that consumes that chemical is often an extremely bad idea. Your blood normally contains glucose at a concentration between 4 and 6 mM. If your blood glucose needs to double to 10 mM before the enzymes in your body begin to deal with it properly, then you are probably diabetic.

Enzymes acting at irreversible reactions have usually evolved a completely different response to substrate that is most certainly not modelled by the Michaelis-Menten equation:

Enzymes acting at non-equilibrium reactions usually show sigmoidal kinetics, with a very sharp response to substrate: doubling the substrate concentration from 0.5 to 1 mM here leads to a six-fold increase in the velocity

These enzymes are usually multimeric and can co-operatively bind multiple substrate molecules, so there are ES‡, ESS‡, ESSS‡, etc., complexes in the system too. They are also often sensitive to feedback inhibition from other small molecules, so there are plenty of other relevant chemicals you need to take account of when modelling their behaviour. These enzymes violate assumption #1 in the most thorough fashion, and have a sharp sigmoidal (S-shaped) response to substrate.

The Michaelis-Menten is a very good model of the activity of many enzymes in a test tube full of substrate. Its parameters vmax and KM are genuinely useful bits of basic information to obtain about an enzyme, and they are easy to estimate in this simple system. However, Michaelis-Menten kinetics are inapplicable for most enzymes within a cell because most enzymes act on reactions that are close to equilibrium, and they are unsuitable for most of the other enzymes within a cell, because enzymes acting at far-from equilibrium reactions cannot afford to behave in such a lackadaisical fashion. Be really careful when applying toy models to real cells. Be really careful that you know the assumptions of any model you are using.