Organism of the week #11 – Not even primitive

The product of succinate dehydrogenase is ubiquinol not reduced flavin

Last month, I was involved in teaching on a life science communication course, some of the results of which you can see on Wikipedia. One of our guest speakers was Alom Shaha, who demonstrated the misconceptions students have about e.g. the forces acting on a ball in flight:

The ball has recently been thrown from the left of the image, the ground is beneath it.

Invoking a force to account for the rightward motion of the ball is a very common misconception.

For the sake of balance, my version is appended below for your criticism.

This got me thinking that it might be worthwhile cataloguing some of the commoner misconceptions my students have in the biochemistry and biology topics I teach. Like the Perl tutorial, this will be a work in progress: I’ll post larger articles on these topics as I find time. 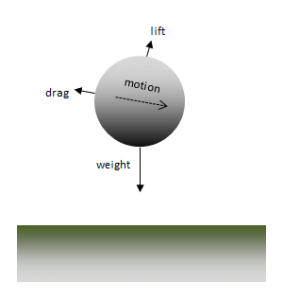 I’m sure this merely points outs my misconceptions about fluid dynamics rather than those about Newton’s Laws. Drag and lift are the components of the aerodynamic force resolved parallel and perpendicular to the direction of motion of the ball; they will depend on whether/how the ball is spinning. I think there will also be a tiny buoyant up-thrust opposed to the pressure gradient of the Earth’s atmosphere, but don’t know if this gets subsumed into the aerodynamic force somehow.