Three for the price of one this week.

Most seed-bearing plants fall into one of two main groups: the flowering plants (grasses and magnolias and butterworts and so on), or the conifers (pines and yews and monkey-puzzles and so on). However, there are three smaller groups of seed-bearing plants that don’t fit into this neat division: the cycads, the ginkgo, and an enigmatic group of plants that are sufficiently obscure they haven’t attracted a nice englishified name, so we shall have to stick with calling them the “Gnetales”.

The member of the Gnetales you’re most likely to have heard of is Ephedra, if only because it gives its name to the drug ephedrine, a decongestant used as a precursor to the illegal synthesis of methamphetamine. Outwardly, it’s a rather nondescript shrub, despite its stimulating interior: 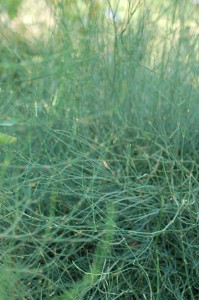 Ephedra sp. I think this was taken at Kew.

Rather more impressive than Ephedra is the genus that gives its name to the Gnetales, Gnetum.

That’s pronounced “Ngnehtum” not “Neetum”. Latin names should – of course – be pronounced as if they were being announced by Cicero, rather than in the bastardised dialect of the mediaeval Church.

Most species of Gnetum are vines (lianas), but Gnetum gnemon is a rather attractive tree: The third and final member of this group is arguably the weirdest-looking plant on earth, which – gratifyingly – also has one of the weirdest names: the miraculous Welwitschia. It looks like the stump of a tree, and produces little red cones that look something like those of a pine tree, but there the outward similarity ends. It only ever produces two continuously-growing long strap-like leaves, which – in the Namib desert where it lives – usually shred into ribbons, giving it the most dishevelled appearance. It is the plant equivalent of the animals on WTF, Evolution? and therefore has a special place in my heart. Quite how these three plants slot into the rest of the plant family tree is not well understood. At various times they’ve been proposed as the sister group of the flowering plants, as the sister group of conifers as a whole, and – despite their very un-pine-like form – as more closely related to pine trees than pine trees are to monkey-puzzles. With the ever increasing amount of molecular data on plant relationships, the question will probably be settled soon one way or another. I shouldn’t get all mystical, but it does seem a pity that soon we’ll be pinning these enigmata down. Ah well. Progress marches on. But the correct plural of a third-declension Greek noun with an -a(t) stem shall remain -ata forever.