Someone recently asked me, “How many cells are there in the human body?”

I have quite a lot of correspondence of this kind, just to be clear.

My fourth thought went on for so long, it became part of the introduction to cell biology and genetics lecture I gave this year, and is reproduced below for your pleasure.

A good place to start is simply to divide the mass of the human body by the mass of a human cell:

I am a very stumpy male human being, so my 60 kg of man-flesh will contain rather fewer cells than an ‘average’ human, but we have to start somewhere: Given that I was wearing a very heavy pair of jeans, let’s call that a nice round:

I would be doing several millennia of instrument makers and legislators a disservice if I didn’t point out just how bloody amazing it is that you can find out how massive a human body is, with a cheap instrument, on an arbitrary but internationally recognised scale, to three significant figures. It seems a shame we so easily overlook the everyday magic of early 21st century civilisation.

The mass of a cell is a rather trickier thing to determine, so we’re going to have to conjure up some  simplifying assumptions. It’s a lot easier to measure the dimensions of a human cell than it is to measure its mass, as – thanks again to the instrument makers – we have microscopes available for this very purpose.

Conversion between mass and volume is a doddle as long as you know how dense the thing you’re measuring  is. Fortunately, I went swimming last week, and know that the difference between me floating and sinking depends on whether I have taken a big gasp of air or not. So the human body must have very nearly the same density as water, which is a convenient:

So my volume is about:

To work out the volume of a cell, we just need a picture and a scale. Below is just such a picture with a scale: something I scraped out of my cheek, under a microscope, with a “graticule” eye-piece ruler. 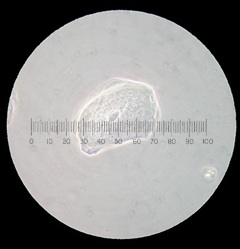 Each small division on the eye-piece graticule you can see across the image is 1 µm: I know this on account of having put an actual ruler (of sorts) under the microscope and worked out the conversion factor. So this cheek cell is about 40 µm across.

To convert this into a volume, we also need to know how thick this cell is, whereupon we hit trouble, as I have no idea at all. However, I do know that blood cells are round-ish (or at least Werther’s Original-ish), as they tumble about, but they turn out to be a much smaller 7 µm across: Hmm. Given that looking at just two sorts of cell is already giving us trouble, it seems reasonable to make some more  simplifying assumptions, and pretend that human cells are perfect cubes with sides 10 µm by 10 µm by 10 µm.

Such idealised cells have a total volume of 1000 µm3 , otherwise known as a picolitre:

So the volume of one of my cells is about:

If we pretend my body is made entirely of slightly oversized, cubical red blood cells, then it would contain:

No. We have made a number of simplifying assumptions, and now is the time to worry about them, and their effects. Some are fairly trivial, others very foolhardy.

All these assumptions are iffy, but none of them would make a massive difference to our estimate of the total number of cells: at most, we’re talking halving or doubling the 60 trillion.

The more serious problems with our assumptions are two we didn’t really state explicitly. Firstly, human beings are not perfectly packed bags of cells; and indeed, much of what constitutes a human body is not cells at all. Secondly, the hand-waving about the size of an average cell hides a great mass of complications, only barely hinted at by the  cheek cells versus red blood cell disparity.

Humans are made lots of different kinds of stuff, almost 100% of which is things other than cubical red blood cells. The internet is indeed full of lies, but much of it can be cross-checked with common-sense. The figures below (culled from Wikipedia) seem to fit with what I’ve seen when converting non-human animals into pies. Obviously, the numbers vary greatly from person to person, but this whole calculation has been a rough-and-ready estimate, so let’s not get too hung up about them:

Bones do contain cells, but what they contain a lot more of is calcium phosphate and collagen, neither of which is cellular. The 35% of you that is bone doesn’t actually contribute significantly to the total number of cells in you. We should therefore knock-off about 20 L from the original 60 L of my body we assumed was made of cells. Only the ‘bone corpuscles’ (black blobs) in this image of a section of bone are actually cells; the rest of the bone is a non-cellular matrix of collagen and calcium phosphate

Skeletal muscles are made of very large cells, about 1 cm long (i.e. 10 000 µm by 10 µm by 10 µm). So, skeletal muscle cells are about 1000 times more voluminous than normal cells. With our original assumptions, the cells in 24 L of my body are being over-counted by a factor of 1000! Since this is such a massive difference, we can excusably pretend that muscles are non-cellular: despite being 40% of my volume, they contribute less than 1% of my cells! It’s also worth noting that skeletal muscles cells often contain more than one nucleus, so even calling them ‘cells’ should give you pause for thought.

Blood is about half plasma, which is non-cellular, so we can knock off another 3 L.

The human cells in faeces are mostly dead, so we can probably also knock those off the total too. All told, 49 L out of my 60 L are non-cellular, or nearly so. We need to reduce the 60 trillion estimate by five sixths, giving a (hopefully more reliable) estimate of:

The faeces we dismissed as inhuman non-cellular muck, are actually packed with cells, only they’re not human ones. Much of my faeces (and I presume yours too, but I’d rather not check) is made of bacteria; and bacterial cells are titchy: The bacteria above are Enterobacter sp., which are found in the human gut, although this strain (‘W1’) is of interest to me because they break down a wood preservative. They’re about 2 µm long by 0.5 µm wide, so they have a volume of just 0.5 femtolitres, some 2000 times less voluminous than the human cells we modelled above.

Assuming my faeces are made of perfectly packed bacteria, 2 L of it contains:

By this estimate, there are about 500 times more bacterial cells in 2 L of my poo than in the other 58 L of ‘me’. Even if we’ve over-estimated the proportion of faeces that is bacteria by a factor of 500 (unlikely!), the human cells in my body are still outnumbered by bacterial cells.

This leads us to two rather startling conclusions:

This is why I love maths, and this is why how you answer a question is always far more interesting than what that answer is.